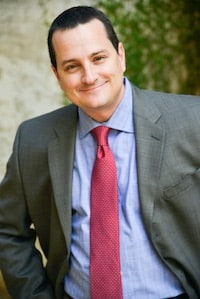 "...excellent versatility and breadth"
"Barry is a great representative...I would recommend him as a go-to attorney"
"...great, professional representation... "

Before opening his Dallas, Texas employment law firm, Barry represented some of the nation's most prominent employers for two of Texas' largest law firms.  During this time, Barry observed that employees often didn't receive the kind of zealous representation that their cases deserved.  Executives, professionals, managers, and other Texas employees couldn't retain the large law firms that their employers used due to the law firms’ conflicts and the huge fees those firms demanded.  At the same time, he saw that many traditional plaintiffs employment law firms accepted too many cases, staffed matters with a virtual revolving-door of inexperienced lawyers, or simply didn't offer clients the level of sophistication and attention their disputes deserved.

Barry opened his employment law firm in 2004 to offer employees, independent contractors, and small businesses. An employment law practice with a large law firm's depth and sophistication and the cost structure, accessibility, and personalized attention of a small firm.  Barry's client-first approach is evident in almost all areas of his practice.  Barry—not a secretary, paralegal, or junior lawyer—returns all client telephone calls and e-mails, and always within 24 hours--often a lot sooner.  While many employment law practices train their young associates on their clients' time, Barry personally manages and litigates each case.

On the employer side, Barry dedicates his practice to helping small companies, entrepreneurs, and growing businesses to avoid disputes and to minimize exposure when disputes cannot be avoided.  This includes representing businesses in administrative proceedings with the EEOC, DOL, and Labor Board, defending lawsuits in state and federal court, drafting and enforcing non-compete and non-solicitation agreements, drafting and reviewing employment handbooks, and providing day-to-day employment law advice.

Contact Barry here to learn whether his approach is right for your dispute.

State Bar of Texas; Labor and Employment and Litigation Sections